Is it really August? That’s what some of us were asking when we saw the forecast for the weekend, especially since earlier in the week we’d had heat indexes above 100. This weekends weather was for highs in the upper 70’s/low 80’s, clear skies and light winds – perfect cycling weather!

A relatively small turnout for the weekend made it easy to form teams for the Dart – there was one team! The route we chose was the hillier of the two Dart routes I’d put together (link) with the reward being lots of time up on the ridge tops with what realtors describe as “forever views”.

We left Richland Center promptly at 08:00 with clear blue skies and temperatures in the low 60’s. After riding through the “big city” we got onto CR-A headed toward Boaz. The entire route for the day was on quiet 2 lane roads except for the stretch between our midway point of Boscobel and Muscoda. Most of the days riding was completely car free – one of the true joys of riding in SW Wisconsin! After “summiting” on the ridge tops and enjoying the views we dropped down into Boscobel where we had lunch at the Subway (would randonneurs survive without Subway?) where we took the obligatory selfie:

Anyone who has ever done a Dart or Flèche knows they’re best described as “brief periods of riding between long periods of waiting”. After an extended lunch in Boscobel we undertook the grueling 7 mile ride to Blue River where we’d have to wait until 14:00 to get our receipt proving we’d ridden the requisite 25K in the last two hours. Fortunately, due to the extraordinarily brilliant planning on the part of the ride organizer, we arrived just in time to catch the last 30K of the mens Olympic road race so the wait was very pleasant. We then headed out to do the rest of the route which featured one more testing little climb before we were back.

After such a grueling ride we needed serious nourishment and the Texas bbq prepared by my wife Marcia filled the bill.  Brisket, chicken sausage, potato salad, cold slaw, corn muffins with brownies for dessert. Nobody went home hungry! 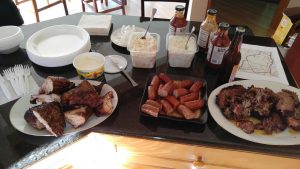 In keeping with the relaxed tenor of the weekend, Sunday’s populaire featured a leisurely ride over to Spring Green for breakfast at the general store.

For those who’ve not eaten there (which likely includes the majority of the planet), the general store does an awesome breakfast on Sat/Sun mornings but you’ve got to get there before 11. Given the anticipated relaxed pace we set the start at 07:00 which worked out perfectly. The route is mostly flat with a total of 1733 feet of climbing though it does feature a rather testing climb right at the end just to make you feel like you’ve gotten at least some exercise.

We made it to Spring Green in good order though we did manage to lose Ron just before getting to the general store which resulted in a bit of hunting around. He finally turned up and three of us (Bill needed to get home so he went on) tucked into a nice breakfast. In another example of brilliant planning, the first control after Spring Green was an untimed info control so we had lots of time to linger over that 4th cup of coffee.

Leaving Spring Green we rode through farmlands on quiet roads toward Bear Valley then turned onto CR-B toward Sextonville which involved a bit of a climb. Leaving Sextonville we headed toward Ithica then onto CR-N and our final climb of the day followed by a screaming descent back into the big city and the finish.

Couldn’t ask for a better weekend!