One for the hard men!

The forecast for the ride wasn’t promising. As is usually the case, all of the online forecasts varied pretty widely ranging from “not very nice” to “really awful”. Fortunately, although the weather was nearer the latter we were spared some of the more dire predictions (40 MPH winds).

Three hardy souls showed up at the start with ominous clouds and temperatures in the low 40’s. Most forecasts agreed the rain wasn’t going to start until mid-afternoon so we thought we’d get a few miles in before donning rain gear. About 30 miles later it started to rain….

We got to the first store stop at Soldier’s Grove in good order. While there it started raining – not hard yet but enough to get the roads wet so we all put on the rain gear (except Mike F. who had a lovely Showers Pass rain jacket keeping his closet dry). After leaving the control, Alex P. got a flat in his rear tire, we all stopped to help and got it repaired pretty quickly. A looooong climb got us warmed up again and a few miles later Alex got his second flat (some guys have all the luck!). Our first thought was given the short interval between flats he’d not found what caused the first one but it turned out to be in a completely different place (some guys have all the luck!).

Patched and on our way, we rode into our control at the Co-Op in Viroqua for a nice lunch – hot soup on a cold day really goes down nicely! The rain started falling harder while we were eating giving us “encouragement” to get back on the bikes – not!

Leaving Viroqua in steady rain which would remain for the next 60 miles. Fortunately, the route was on quiet roads although shortly after going through the “town” of Avalanche a guy in a pickup coming the opposite way rolled down his window and yelled “get the f#%$ off the road”. I don’t understand people sometimes.

We rolled on past the Amish farms that dot the area and into the Kickapoo river preserve area toward our next control at La Farge. A relatively quick stop to regroup then up the long climb to West Lima followed by a rapid descent and then through the valleys to our final store stop at Rock Bridge. Mike was pretty cold at that point but my lovely wife was waiting there and had brought a couple of extra jackets for me “just in case”. I offered one to Mike and he was good for the rest of the ride – thanks Marcia!

It finally quit raining while we were at the control! Leaving Rock Bridge we headed toward the last steep climb of the day on CR-D, a nasty 10% with a “sting in the tail” of 12% at the top. Then a couple of rollers, a nice descent and roll through Sextonville then the finish! A tough day all in all but great company and one of those “epic” rides that strangely enough are the only ones we randonneurs ever talk about. 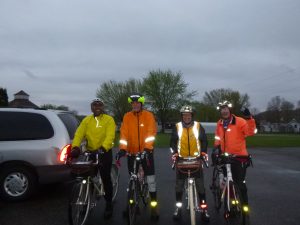