Our final brevets of the series (but not the season!) took place on June 4th with one rider doing the Fennimore Frolic 200K, two riders on a tandem riding the Scale the Mound 400K and three of us taking on the South then West 600K. The longer two rides share the same route giving us five riders on the longer course on Saturday.

When I awoke at 3:00 it was to the sound of a hard rain falling – oh no! By the time registration was done and we rolled out it had diminished to sprinkles and wet roads and after an hour or two turned into a pretty nice day. Because I was riding the 600K, I didn’t have the opportunity to meet Juliet Droege who would be starting at 8:00 taking on her first brevet! My wife graciously handled the check in details for me (thanks!) and got Juliet on her way. Unfortunately, she wasn’t able to finish but did complete 70 miles of the route and reported that she enjoyed the part of the course she rode. 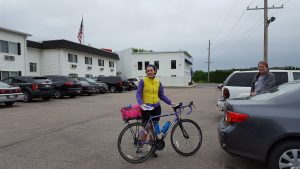 Juliet taking on her first brevet!

As is often the case, the climb out of town “split the peloton”  so we arrived at the first store stop individually but regathered at the stop. This was to be the theme for most of the day with everyone riding their own pace over the many tough climbs in the middle 150 miles of the route. My barometric altimeter showed just under 14K feet of climbing for the first day and the route is such that the first and last 40 miles or so is flat to rolling so all of that climbing happens in the middle with a number of long and steep grades. Here’s the profile of the middle section:

Alex Piotrowski and I rode together to the first store stop in Boscobel and at various times in the middle of the day until he, Jerry Christiansen and I grouped together toward the end of the day to ride together in the dark. Alex becomes the first person (beside the RBA) to complete a brevet series in SW Wisconsin! 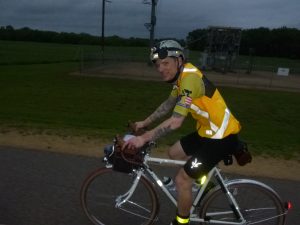 Alex rolling through the morning

Following a number of long and steep climbs along with some stunning vistas from the ridge tops which almost made the climbing worthwhile we all arrived at the store stop at Cassville at about 80 miles in. Everybody elected to take a longer break and get something to eat since this was the last opportunity for “real” food until the stop at Belmont at 160 miles. There’s a stiff climb leaving Cassville but fortunately it’s a few miles out of town to give us all an opportunity to let the food settle before tackling the climb.

We then rolled through a nice section along the Mississippi on Great River Road, the day was heating up but this section offered abundant shade along with some nice views of the river. 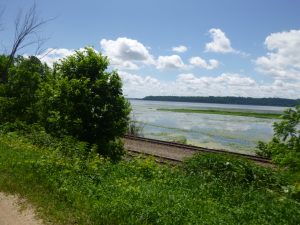 Because of the warmth of the day, most riders elected to make a stop in Dickeyville to get something to drink but I was OK on fluids and feeling alright so I pressed on to the next control at Hazel Green. Alex caught me just before arriving at the control and the rest of the group arrived not long after. I cautioned everyone that the next stretch up to Belmont was a tough one and advised them that although it wasn’t a control there was a store stop in Shullsburg if they needed to take a break or restock fluids. Nobody but me did (local knowledge) and everyone said how hard that section was. Pretty much straight north, not a tree in sight and a dozen or so “rollers” – not the “good” kind where your downhill momentum carries you to the top of the next hill, the “hard” kind where you grind up one 6%-9% grade after another.

About 5 miles outside of Belmont there’s an ATV trail that crosses the road. I’d been through there a number of times and the ATV’s fly on that trail (the speed limit is 60 believe it or not). As I was approaching the trail, one was coming from the right at a very high rate of speed and it didn’t look like it was going to stop. Long story short, I was so busy watching it that I hit a pothole with sharp edges – instant pinch flat. Alex hadn’t stopped in Shullsburg so he was ahead of me and Jerry came by while I was fixing the flat. I told him I had everything in hand, got it fixed and headed to the control into rapidly darkening skies.

Since this was the last food opportunity on the route, everyone stopped for a meal at the Subway with Paul and Jennifer Danhaus being the last to roll in (those hills are tough on a tandem!). While we were there a hard rain started to fall so we all decided to take a longer break and wait it out and probably stayed an extra 20 minutes or so before it started to subside. We all put on rain jackets and left in a steady but not hard rain but fortunately it quit about 5 miles out of town. 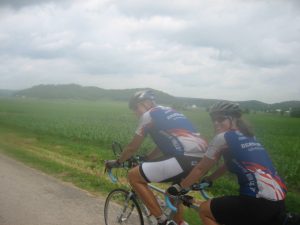 Alex, Jerry and I grouped up for the rest of the ride to the overnight. The period between when we left Belmont and before darkness set in was just beautiful: clean, fresh air with a scent of alfalfa and clover in the air and beautiful skies. We were rewarded with a nice rainbow. 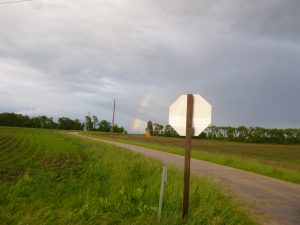 Rainbow after the storm 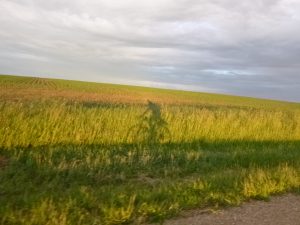 We all made it into the overnight (finish for Paul and Jenn) in good order with Alex, Jerry and I arriving a little after 2 AM and the tandem team finishing a bit after 4 AM. A long day for all and a tough route but a beautiful day and all in all the weather was pretty nice.

Q: Which direction is the wind coming from?
A: Which way you goin’?

Every cyclist has had those days: you do a route where you are riding against the wind no matter which direction you go. This was one of those on steroids. The forecast was for winds gusting 30 MPH from the NW. Looking at the route profile this would mean we’d have a long grind up to Norwalk then a nice push to Cashton and some help the rest of the way to Boaz where we’d only have 15 miles or so to go.

So much for the way it should go. We ended up riding against gusting 30 MPH winds for much of the day.

We’d agreed to sleep in and leave just at the control close time from the overnight. Because the first day was such a tough one, the RBA wisely made the first control an untimed info control so our first “on the clock” control was in Norwalk at 54 miles. We all made this with a couple of hours in the bank. We mostly rode separately all day, joining up at the control in Cashton for lunch then each of us riding at their own pace into the wind.

I left Cashton first and rode from there to the finish 70 miles away with only a few brief stops. I “dodged a bullet” just before the long climb up CR-I. I’d installed a larger cassette on my bike without installing a new chain. I knew “big/big” didn’t work but thought I’d get “one more ride” out of the chain before I put a new one on. As I was approaching the climb I was going up an early part of the grade and shifted the rear derailleur all the way onto the biggest (easiest) cog not realizing I was on the big ring in the front. Fortunately, I didn’t destroy the derailleur, just jammed everything up tight. I had to remove the wheel in order to dislodge the chain but after 10 minutes or so of fooling with it I got underway again.

Alex caught up with me not long after and he and I rode into Boaz together. He said he wanted to stop and get something to drink, I was smelling the barn so I told him I was going to ride on to the finish. I did stop just on the side of the road under a tree on the other side of Boaz for a little bite to eat and something to drink though. Fueled by an ice cream and coke, Alex caught me about a block from the finish and I was pleased we were able to finish the ride together. 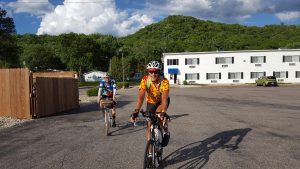 Greg and Alex at the finish

Naturally, after successfully completing such a tough ride, refreshments were in order: 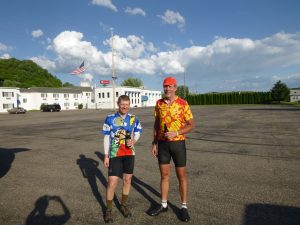 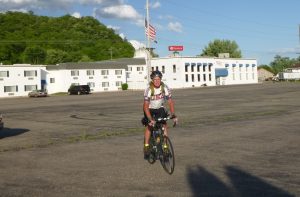 Jerry at the finish

So all in all, a great capstone to the series. A DNF on the 200K but an enjoyable ride just the same and all starters of the 400K and 600K got it done on a very tough parcours. Congratulations to all!