About a week before heading back to Wisconsin from my winter sojourn in the Texas hill country I had a look at the long range forecast – not bad! March 31 was supposed to be a high in the low 50’s and clear skies. A bit coolish for this thin blooded snowbird (hey, you’re talking to a guy with tan lines!) but doable. So I added a RUSA 200K to the calendar for the 31st and sent out an announcement about a new early season ride.

Thus, our doom was laid: 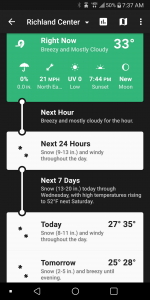 On the 31st it wasn’t quite that bad, but close: rain, low 40’s, 40 MPH wind gusts – hypothermia weather! Needless to say, everyone decided to take a pass. We may be randonneurs but we’re not stupid.

OK, that didn’t work out. Time to regroup. The first regularly scheduled ride on the calendar was an ACP 200K on April 21st. Surely the weather would be better by then, I mean after all the first day of Spring was officially March 20 – a full month earlier.

As the ride date approached we had this:

and then on Wednesday before the ride we had this: 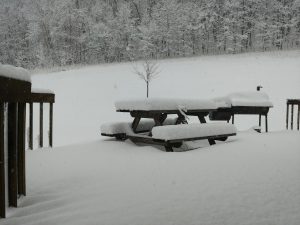 but wait – it’s Spring dammit! Didn’t somebody get the memo?

Fortunately, the snow melted pretty quickly and a survey of the roads showed they were free of snow and ice although there was a ton of sand so riders had to be careful.

On the day of the ride, eight hardy souls showed up. The temperature at the start was in the mid-30’s with a forecast high of upper 50’s but relatively light winds.

We started promptly at 8:00 on the Via Viroqua route. This is a pretty tough route for the first ride of the season (note that it was supposed to be the second ride of the season!) with about 7K of climbing so it was a pretty stern test of the early season legs. Here we are heading out on the first climb of the day which happens almost right out of the gate: 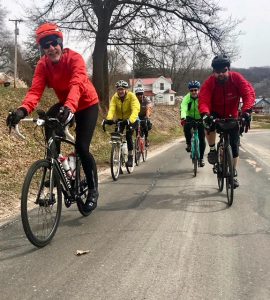 This route features several “info” controls. This was a bit too much for some of the riders to handle. The first one was early in the ride to get everyone into the zen of what they needed to do and pretty much everyone but Bob B. took the test and got an “F”. Lots of turnarounds as people realized they’d missed it so everyone was a bit more attentive for the second one.

One of the things you never know before a ride is what sort of group dynamic is going to happen. Sometimes a group fragments into 1-2 riders and sometimes it’s done Audax style where everyone stays together. This ride was the latter. Although ride speeds varied a bit, we reformed at controls through the day and pretty much stayed together through the whole ride.

We made pretty decent time through the first control and then on to Viroqua where we took a leisurely lunch break. After a nice run through the Kickapoo river valley we faced the long climb out of Bloomington toward Cashton. This is a pretty tough one but everyone made it in good order.

After another nice descent we headed toward the next info control. Richard had a “Dr. Doolittle” moment with the llamas at the control.

After the control in LaFarge we did the long climb into West Lima then a nice descent and another long run through a river valley toward Rock Bridge and our next control. Greg, John and Richard rode this segment together but the group reformed at the control.

After a brief stop at Rock Bridge we headed toward the last “major” climb up CR-D which is about 1/3 mile of 11-12%. Greg B. was having ankle pain at this point but got to the top nonetheless and we polished off the last few shorter (but steep!) climbs before the rolling terrain that would take us back to the “big city”.

Here we all are at the finish with Greg B. contemplating an on the spot amputation – he decided against it given the quality of the surgeons at hand.

All in all, a great day in the Driftless. A tough ride for so early in the year but the weather was decent enough (with sunshine at the end!) and the camaraderie added a level of warmth that’s above and beyond whatever Mother Nature can dish out.

Thanks all for turning it into such a grand day on the bike and thanks to Richard for some of the photos.